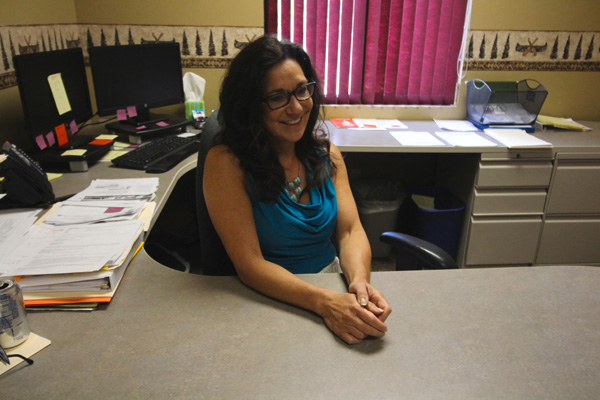 Ever-changing and fast-paced is the world of technology. Individuals and businesses alike strive to keep up with the constant advancements.

“The infrastructure might be the systems, the desktop, the data center, the network,” Hernandez said. “We may design, implement and support the entire solution or just a component of the solution.”

Hernandez’s longtime interest in technology led her to pursue a bachelor’s degree in business, psychology and Spanish from the University of Minnesota-Twin Cities and a Master of Business Administration degree in management and marketing from Metropolitan State University.

I’ve always been in the technology industry since right out of high school,” she said. “So technology has been part of my lift since I first started in my career.”

Though she originally wanted to become a lawyer, Hernandez began working at technology companies after high school and college. The diversity of the field piqued her interest and led her to where she is today.

With offices in Pequot Lakes and Minnetonka and remote locations around the country, Ideal System Solutions is a growing company that Hernandez and her husband, John McGuire, started in their Pine River home after Hernandez wrote the business plan as a part of the graduation requirement for her master’s degree.

“After I wrote the business plan, I just decided, why not?” Hernandez said. “I’ve already done all of my homework, and the plan was in place, so (we) decided to start the company. So we officially opened January of 1997.”

The company office in Pequot Lakes opened in 2008 after the company grew too big to run out of Hernandez’s house. Since she is originally from the Minneapolis area, there has always been an office in the Twin Cities. It was Hernandez’s husband who led her north to the Brainerd lakes area.

“We were both in the technology industry together. We worked with the same company, and in 1995, I came up here and visited the area,” she said. “(I) fell in love with it, fell in love with him, and still here.”

Earlier this year, Hernandez was inducted in the Minnesota Women Business Owners Hall of Fame, an award she was “very humbled and very honored” to receive.

“Some of the other awardees were absolutely incredible- their backgrounds, their stories, the caliber of women that were selected,” Hernandez said. “I’m just honored to be part of such a distinguished group of women.”

As for her business’ other achievements, Hernandez knows she alone cannot take credit for all the success.

“Mostly these awards are for the company,” she said. “This company has been built on a team effort. It’s not about me and me winning the awards. It’s about the organization winning the awards. And I just have a really great team of people that make those awards possible.”

Though the company’s achievements are important for Hernandez, being able to spend time with her family is the highlight of being a business owner.

“I would say the best part about owning your own company is the flexibility,” Hernandez said. “I have two teenage children. They were babies when I started the company, but I’ve had a lot of flexibility to spend time with them, to participate in their sports, their school activities.”

For others who are interested in starting their own business, Hernandez has a few tips.

“There’s so many resources out there that you can tap into for people that … want to look into owning a business or entrepreneurship,” she said. “Reach out to other people that own companies. Ask a lot of questions; network. And do your research and make sure that it’s a viable business plan, and once you determine it is, just go for it.”

• Entrepreneur of the Year Award 2014 Department of Energy